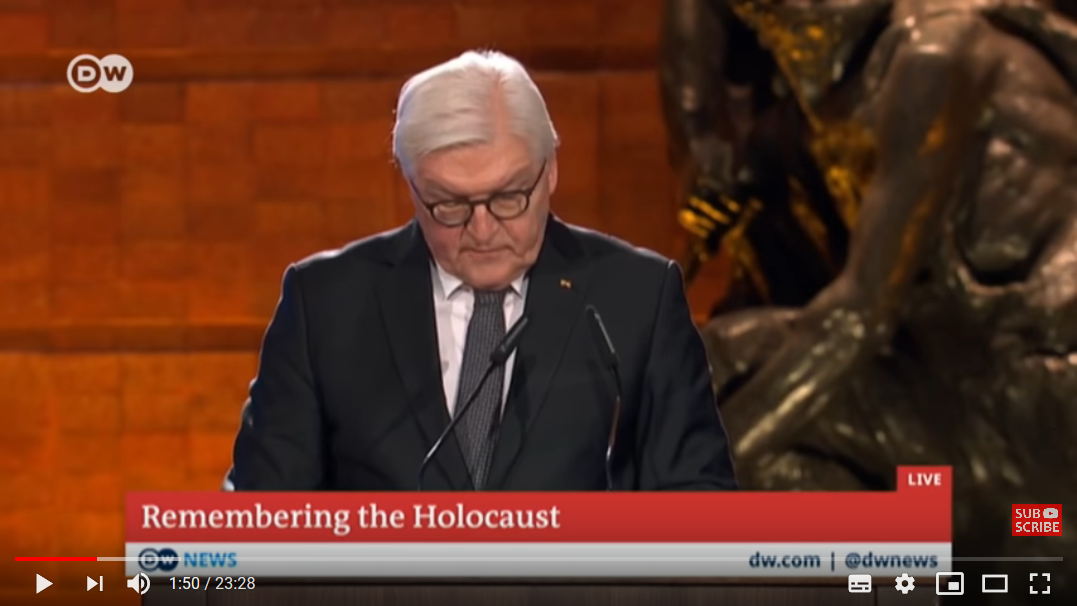 ‚I bow in deepest sorrow for German acts‘

Please take the time and listen to this speech from Frank-Walter Steinmeier, President of Germany, at Yad Vashem Memorial in Jerusalem.

Ceremonies were held at the Yad Vashem Memorial in Jerusalem to honor Holocaust victims and survivors. This is the first in a series of events marking the 75th anniversary of the liberation of the Auschwitz death camp, which is commemorated as International Holocaust Remembrance Day. Dozens of international heads of state and government joined Israeli leaders at the ceremony. . In the first speech by a German president at Yad Vashem, Frank-Walter Steinmeier said Germany’s responsibility for the crimes of the Nazi regime will never end. Russian President Vladimir Putin, French President Emmanuel Macron and US Vice President Mike Pence were also among those who remembered one of the world’s darkest chapters and vowed to fight anti-Semitism in their countries.

“Blessed be the Lord for enabling me to be here at this day.”

Here you can find his speech translation in German and other languages:

“Blessed be the Lord for enabling me to be here at this day.”

What a blessing, what a gift, it is for me to be able to speak to you here today at Yad Vashem.

Here at Yad Vashem burns the Eternal Flame in remembrance of the victims of the Shoah.

This place reminds us of their suffering. The suffering of millions.

And it reminds us of their lives – each individual life.